This is not one of those “look at how we’ve grown!” posts. Instead this is one of those “how did we get here?” kinds of posts, which I swear is totally different! To do that, I’ll talk a bit about the definition of the term NSR, as well as some of its associated history and impact.

A Definition No One Will Argue With

As of Wednesday, May 4th 2022 you can read the “complete” definition of all the elements of an NSR-style game here on Pandatheist’s blog. This is wonderful on the one hand, as now I can point to this post and say, “here’s a definition for design purposes! Now go make stuff.”

But I know that that won’t be good enough, because the NSR is not simply a play style or game design philosophy. It is so much more than that. And I plan on explaining exactly what I mean… right now. Here it is, folks: I’m going to define what the word NSR means to me so that Google & future historians can reference yet another blog in their endless pursuit to record and destroy the world’s information!

The NSR means whatever the fuck you want it to mean.

I’m not being pithy! I mean it. Go on, take it! If it fits what you’re doing, use it. Welcome to the community. Because to me, the real definition of NSR is not beholden to the definition linked above (though I do appreciate and agree with it as a framework for play). To me and many, many others the NSR is a community, full stop. I talk to my friends on the NSR Discord more often than most of my IRL friends, both publicly and in DMs. I’ve met quite a few in the flesh as well. I rely on their creativity, sensitivity and humor to get through the day (especially these past few years). The community we’ve built is much bigger than a play style or brand. Instead it is a network of people united by beliefs and principles.

Here are a few examples of what regular NSR Discord members have said about the term NSR, picked semi-randomly: 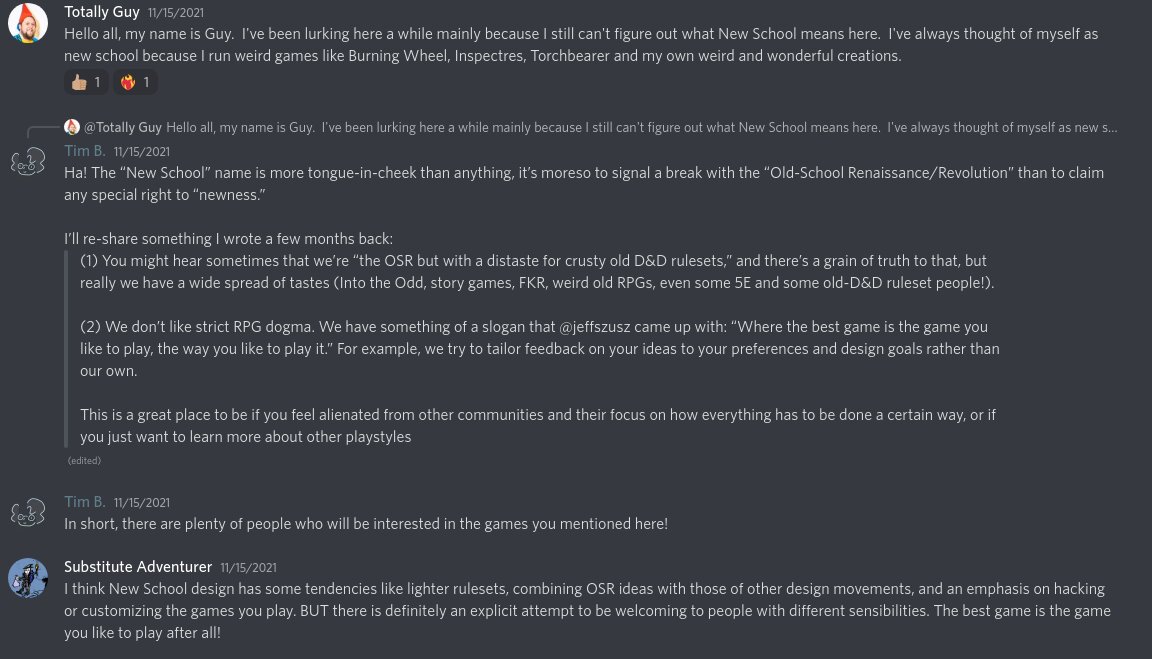 It feels like the NSR “community” is known for being open, creative, supportive… Pretty nice, right? So… How did we get here? How are we doing?

Who Knows How Words Are Formed?

It’s been over two years since the first post of this blog, and the “public” opening of the NSR Discord (currently at 1,260 members). We’ve also launched a Discourse forum that I’m quite proud of, despite failing to post there as often as I’d like. There are 64 games tagged “NSR” on Itch.io Physical Games, and about 8 in their “Games” section. I reckon quite a few of us have likely forgotten to include it as a tag as well (ahem).

Most folks probably already know the term “NSR” owes its origin to a Bone Box Chant post by Pandatheist, though on her blog she points to a slightly earlier conversation between Necropraxis and Brian Ashford: 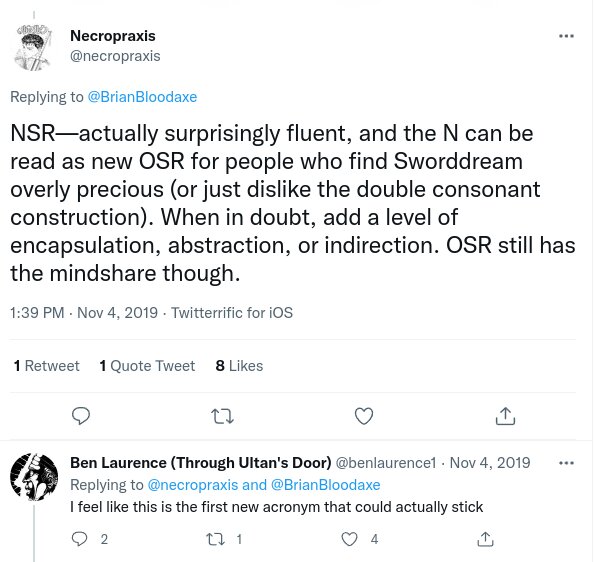 You can see Pandatheist take up the mantle here: 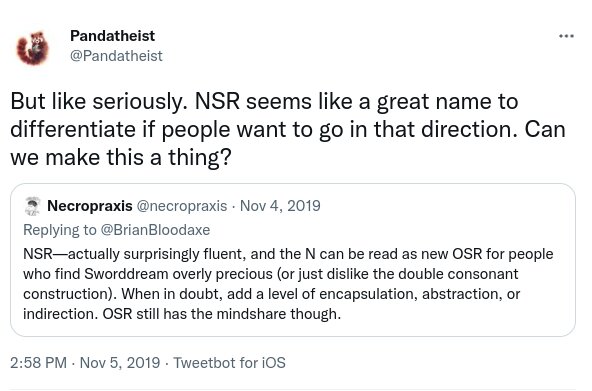 But that is not the whole story. Because even at our community’s earliest stages, something sinister loomed.

Fear is the Community Killer

Behind those first few tremblings, something else was stirring:

I get where this person is coming from. Their fear is all too real, a specter that haunts this hobby, and many others as well. And it raises a few questions that I’ve been poring over for some time:

How do we keep our communities safe from the influence, presence and power of nazis, bigots, fascists, transphobes, and the like?

And how well have we done so far?

Knowing Is Half The Battle…

The OSR/Indie TTRPG community is full of bad actors. Identifying and tracking these folks so that they and their followers do not gain an active presence in our communities is pivotal. For one of my favorite examples of this, read this (anecdotal) story from Twitter about a bartender in Baltimore.

There are generally three types of problematic users (other than SPAM accounts of course):

Within that last category, these types generally they fall into two categories: Racists, Bigots & Transphobes and Enablers & Platformers. The Discord/Discourse mods may maintain a private list of these for reference.

I think anyone reading this knows who these people are. I won’t list them here as it simply fans attention their way. Any user linking to their blogs/products results in a public conversation with the person(s) involved, and (usually) an immediate ban. Not everyone knows the truth behind some of the more popular OSR blogs, so we do take it on a case by case basis.

This bit is a little more complicated but in some ways is more important than the first, so I’m actually going to offer an example in this case.

I’m confident that the majority of folks reading this blog are familiar with the review website tenfootpole.org. I doubt anyone would disagree that the reviews there lean towards the mean-spirited, as do many of the comments below each review. To my knowledge, the website or its owner have never espoused views that would place it in the first category. However, the website actively and unabashedly platforms many, many deplorable people by allowing these bad actors to fill up the site’s comment section with their vitriol and hyperbole and by reviewing these bad actor’s products. That place is a den of snakes.

If a user on the Discord/Discourse server was to link to this particular website, it would not result in a ban, nor would the link be taken down.

There would be an immediate and public comment from the mods/other community members informing the link poster of the link owner’s status as a platformer. This typically results in a debate with the person linking to the page, or with them saying “I didn’t know, thanks!” and moving on. The former almost always results in a voluntary withdrawal from the server(s).

There are also warning signs from the followers of the above two groups. People that say things like, “I don’t want politics in games” or decry “emotions” in games. I personally tend to be wary of the grognard varieties, especially if they insist on what D&D is or was on a semi-frequent basis. As I elaborate on below, we must be ever vigilant around specific trends away from our status quo.

…And the Other Half is Overwhelming Force

Identifying problematic folks outside the community is one thing, but how do we combat dangerous trends among our own? Let me introduce you to my two best friends, active moderators and empowered community members. Both forces work with unceasing vigilance to create a default “standard” of allowable discourse in our space, which must be constantly reinforced.

Moderators are trusted users empowered with the authority to enforce our community rules, guidelines, and culture. To be effective they must be both active in the community and ever vigilant. The latter can be exhausting, which is why extant policies that stand against pernicious behavior are an absolute must.

For reference, the following are verbatim the Discord server rules, released as CC-BY-SA 4.0.

Be Nice, Even If That Means Being Mean

We have worked very hard to develop a culture that outwardly negates not only the usual bad actors, but also dissuades some of the “bad behaviors” common to this hobby as well. We have pushed back against sincere attempts to “define” what is and is not “NSR” (see above), in favor of tongue-in-cheek descriptions and inclusive definitions. We try to assume good faith and when we encounter someone who isn’t doing so, or is generally not being very nice, we call them out (publicly or privately, as it happens). Mods are not the only folks who do this, many of our more active users also engage in this sort of discussion management, and I think it makes a huge difference. Similarly we try to slow down the mob mentality/pitchforks that seep into this hobby from time to time.

As one of the heavier online users in the NSR Community, I follow these guidelines for interacting with others. I think it helps create the kind of community I want to be a part of, and I’ve seen others adopt it as well.

The RPG hobby is heavily White, American, Male, Straight, and (some would even say) midwestern. This means that anyone not one or all of those things interested in joining an online RPG community is treated as an outsider pretty much immediately. More than that these folks are actively treated as if they do not belong here. Oh, I should also say: If you don’t think this is a problem, fuck off, because it is you who are not welcome in my spaces.

While there are many philosophies on the best approach to handling this problem, I don’t believe that marginalized folks are responsible for doing it. I don’t think that they should have to explain or defend themselves in any way, because that shit is exhausting. What I do think is that those who have the benefits of colonial privilege, those of us that find it easy to have these conversations, we are the ones that must stand and do the work: that’s the double-edged sword of privilege. Feeling guilty about your privilege? Then DO SOMETHING GOOD WITH IT.

Also if you are like me and seemingly have no problem with conflict (perhaps you even enjoy it), maybe you can do the right thing, too.

rpg, nsr
Let me know what you think of this article on twitter (@yochaigal1) or leave a comment below!
comments powered by Disqus