What is the New School Revolution? Part 1.

On December 21st, 2019 Pandatheist published a short entry called “New School Revolution.” on his blog Bone Box Chant. I’ve reproduced a bit of it below.

What I found so inspiring about his post was how accurately it described the exact play style I enjoy the most (particularly in the last few years). I don’t think I was alone in this reaction, either; it seems he hit the nail on the head for a lot of other folks as well! In this series of posts, I hope to expand upon the post’s initial framework a bit, starting with what a Weird Setting means to me. Any distortions of his original ideas are entirely mine.

Let’s break this down a bit, starting with the shared properties of NSR games. For this series, I’m not going to expound on the NSR properties in any particular order; as such, I’ve decided to start with a Weird Setting!

These writers, different as they may be from one another, all wrote about the uncanny, the unexplained and the unknowable. As described by H.P. Lovecraft:

These stories frequently emphasise the element of horror because fear is our deepest and strongest emotion, and the one which best lends itself to the creation of nature-defying illusions. Horror and the unknown or the strange are always closely connected, so that it is hard to create a convincing picture of shattered natural law or cosmic alienage or “outsideness” without laying stress on the emotion of fear.

To me, The Weird in the context of RPGs can mean a couple of things:

Not to be confused with Gonzo settings, the Weird features characters trying to make sense of an increasingly confusing, abnormal, or terrifying world. Players are not expected to conquer the world, but instead to try and overcome its inherit strangeness.

As The Luminescent Lich writes, it is through “the thrill of discovery and the atmosphere of the fantastic” that the players experience The Weird in play. They start from a place of seeming normality, and venture into the abnormal. In a Weird setting, sentient lion/ostrich hybrids hunting for prey through vast jungles would be unusual, and equally terrifying to the player characters.

Over the past few years, there have been quite a few game systems and settings released with this sort of play experience in mind. One in particular stands out:

There is likely no better example of Weird than Troika!, from Daniel Sell & the Melsonian Arts Council. In his review of Troika!, Aaron Marks of Cannibal Halfing Gaming writes:

Imagine, if you will, that Douglas Adams and Terry Pratchett have returned from the dead. They both pile into a Ford Cortina and take a long drive across the American Southwest, pondering the nature of the fantasy genre. Once they arrive in California, they legally acquire several ounces of the finest cannabis sativa and hotbox the Cortina. Then they write an RPG.

Here are a few bullet points describing Troika!, taken from the publisher’s website:

And from the game’s rules:

Roll randomly to determine your starting Background. Notice that they only touch the edge of specificity: it is up to you to tailor them to the worlds you play in. Rework them or remove them entirely and replace them with your own unique vision of the spheres. Boldy lay claim to the games you play, create content recklessly, and always write in pen.

These backgrounds provide a framework for unique and weird play. Want an example? This character generator by David Schirduan has you covered: 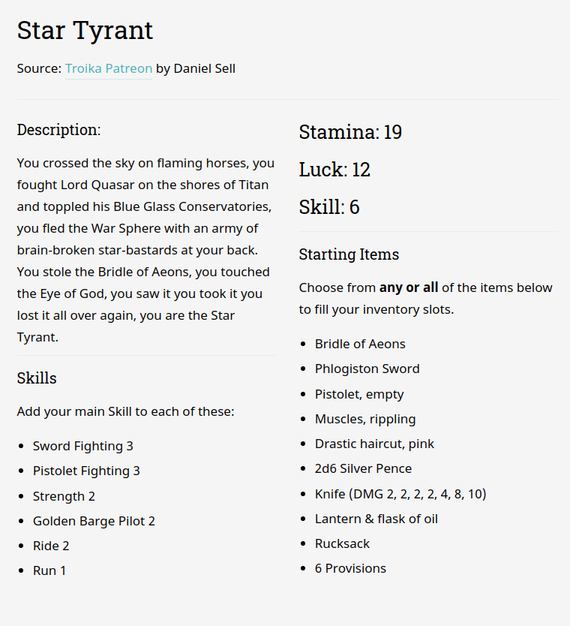 The person playing this character would start with something called the Bridle of Aeons. What does that do? What does it mean for the world we’re building? How do the other characters, rolled similarly, relate to this background? One can easily imagine how a homebrew setting, informed by characters with backgrounds like these, would make for a truly unique play experience.

This is of course just one aspect of what makes Troika! such a special game; the writing and gorgeous art also help the GM and the players lean-in to the Weird. I recommend you check out this review of the system by Questing Beast. The game’s art is perfect for the setting it encourages.

Obviously there are other Weird games out there (The Shadow of Yesterday, Nightmares Underneath, & Best Left Buried all come to mind) but I think Troika! takes the cake. I strongly recommend folks check it out; the art-free version is PWYW.

That’s all for now. Thanks for reading!

osr, nsr, rpg
Let me know what you think of this article on twitter @yochaigal1 or leave a comment below!
comments powered by Disqus