My Father's Dragon is OSR

I’ve recently been reading “My Father’s Dragon” by Ruth Stiles Gannett (with illustrations by her mother-in-law, Ruth Chrisman Gannett).

The books are totally aligned with OSR Principles as according to the Principia Apocrypha. First let’s start with the map (made into a sweet woodcut by a friend): 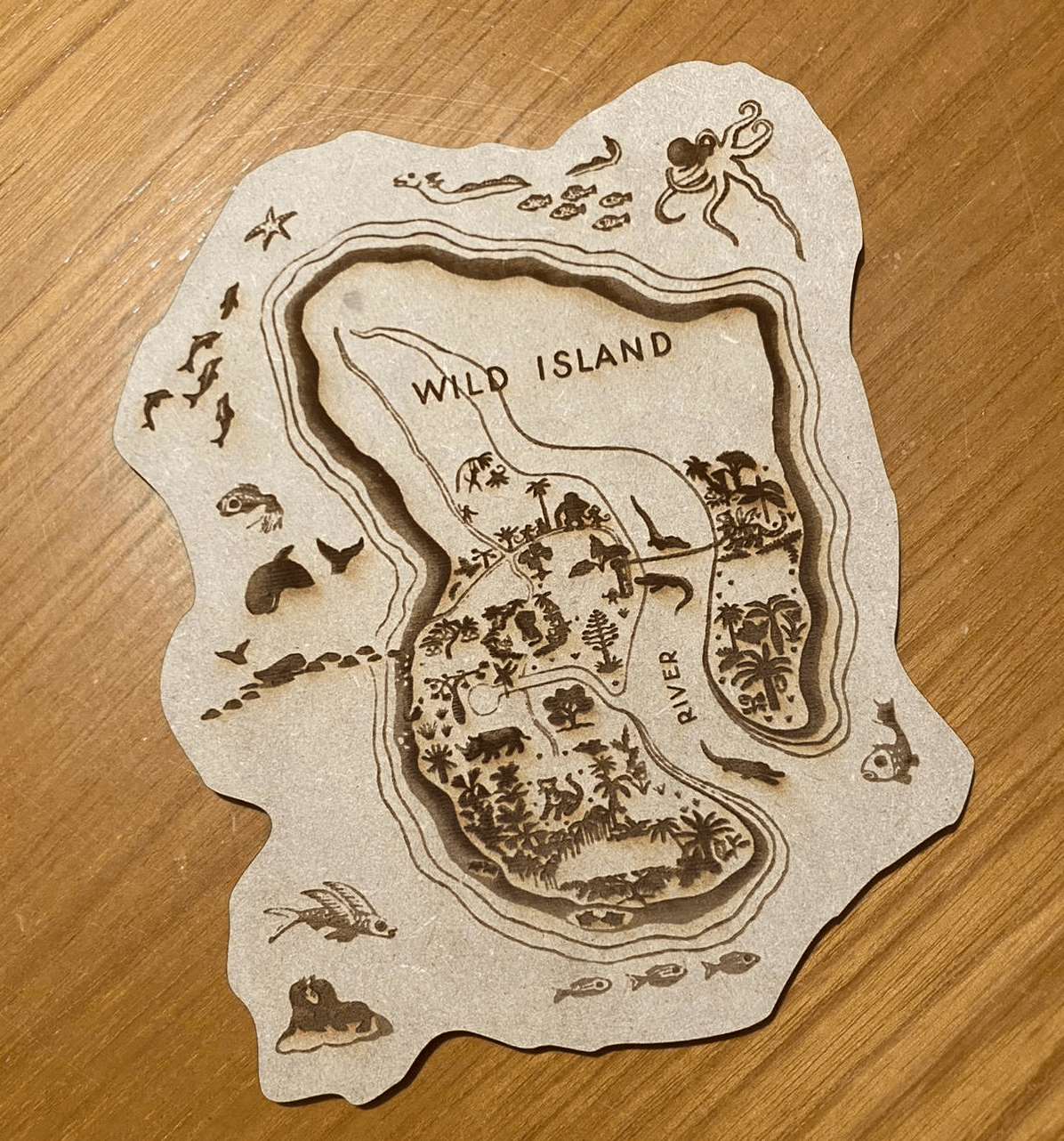 The book is about a boy who travels to an island to free an enslaved baby dragon. The dragon is being used to ferry animals across a river (see map), being held captive by cruel and intelligent animals. The protagonist (Elmer Elevator) is quite savvy, though! He came to the island prepared, his knapsack stuffed with items. The book explicitly list what he has in his inventory multiple times during the story, each of which are used in some clever way.

Here’s the cool thing about the island: Every creature living there can speak. Also, they seem to really want to kill Elmer.

The boy lands on the West side, getting to the island by climbing across rocks (and a sleeping whale). He doesn’t have a map of the island, nor does he know exactly where the dragon is, but he knows it’s near the river and that the river meets the sea.

So what does he do? He travels Southeast along the beach, looking for the river mouth. Along the way he encounters a bunch of animals, most of whom want to kill him. He’s stealthy, but he makes one serious mistake: he leaves behind food scraps (tangerine peels), which the animals understand to mean that there is an “invader” on the island. They then begin hunting him.

As he encounters each creature, he tries to avoid direct engagement each time. Instead he hides, deceives, or distracts them. When he is finally forced to directly engage, he uses intelligence and cunning, and all of his inventory items to find clever solutions.

At one point, Elmer is surrounded by seven tigers, who immediately explain that they are going to eat him. He offers them all gum, but they argue that they can just kill him and take his gum. But then he tells them that this gum is special, if you eat it for a long time it turns green, at which point it can be planted into a gum tree. This is all lies. He gets the tigers to stare into each other’s mouths, trying to see if their gum has turned green yet. While they are distracted, he escapes.

After that, he drinks water from a special pool controlled by a rhino, who then informs Elmer that he will die for drinking from its pool. But the boy talks to the rhino, who opens up about how sad he is on account of his horn being super dirty and old. The boy shows him how to use toothpaste and a toothbrush to clean it up and make it white. He then escapes.

The best part is when he finally finds the river but the dragon is on the other side. He tricks 17 alligator to create a bridge for him by giving each a lollipop (tied to their tails via a rubber band) and having them bite the tail of the alligator in front of them.

When Elmer gets to the other side, the animals try to follow him across the “bridge”. He realizes that he might not be able to cut through the dragon’s rope quickly enough, so he tells the dragon, “Don’t worry, if they come over here we’ll fly across, leaving them on this side. Then, I’ll finish cutting the rope!” That doesn’t end up happening but I love that he considered all his options.

In the second book, he digs up a treasure chest (after learning of its location from King Can, king of the canaries) and uses the dragon’s tail to hoist it out. Here is the page describing its contents:

He keeps some of the gold, the silver harmonica and the gold watch (obviously).

Elmer & Boris (yes, that’s his name) go on to have many adventures throughout all three books. Quite a few of them are great at teaching four important lessons of the OSR:

If you know of other children’s books that help illustrate this sort of playstyle, let me know!

osr, nsr, rpg
Let me know what you think of this article on twitter (@yochaigal1) or leave a comment below!
comments powered by Disqus